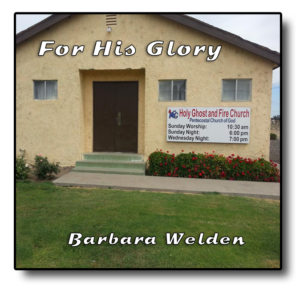 As a child, I had grown up in a Pentecostal Church of God. My mother was my Sunday school teacher and I would always sing with her. I grew up singing “In The Garden” and “Blessed Assurance.”

I have always had a love for God and a love for singing the Gospel. I remember when just riding my bike I would just ride it and sing songs like “This Little Light of Mine” or “Michael Row Your Boat a Shore.” If I would see anyone around I would sing that much louder just to get their attention.

My dad was a truck driver and even when riding with him in the field waiting for our trailer to loaded I would sing. I have ALWAYS loved to sing.

I was saved at 12 and began singing in the young peoples choir. I sang lead to most of the songs. When i was 15, we moved from California to Chattanooga, Tennessee. I had gotten out of church because at that time neither my mom or dad attended church, so if it wasn’t walking distance I couldn’t go.

That February of the following year, my dad became terminally ill with lung cancer that went to his liver so we moved back to California to where I had started back to church again and was able to pick up where God wanted me.

You know I have learned that nothing doesn’t happen unless God let’s it. I know my dad gave his heart to God before he passed on. Later, I had backslid and had gotten out of the will of God. You see even though I wasn’t serving Him, He still kept me safe and even then i still had the desire to sing gospel music.

It is something that God has given me to do for His Glory.

You see its not about me but about our Heavenly father. He is such a great and merciful God, that no matter how far out in sin we get, all we have to do is confess our sins to him and He is faithful to forgive us our sins.

After Jesus died on the cross, He beared our sins as a substitute for us so that we could be free.

I can never thank Him enough for what He has done for me. He didn’t have to save me but he did and I could never do enough for Him but share it with you.

My singing is a gift that God has given me and I plan on using it to the fullest of my ability “For His Glory” and then that still wouldn’t be enough to repay Him for all He has done for me.

I will always do anything I do for the Lord “For His Glory.” I am but the instrument but God is the producer of all things.

Thank You and may god Bless each and everyone that I can touch through this ministry “For His Glory.”